Enter your info below now to join the next Accelerator Program!

IMPORTANT: This Program Is Limited To 3 People Only... Sign Up Now To See If There Are Any Open Spots Left
SOCIAL HACKER™
ACCELERATOR 2022

"In this environment, the rate at which I learnt game was massively accelerated... The results were also INSANE with many pulls and closes over the two weeks... A coach gave a lecture on pulling which covered the A-Z of of how to pull a set and straight after that, a student pulled 3 sets that night!... All three instructors have an amazing technical approach to game that works consistently and can be used by anyone to achieve the same result." – J.F. 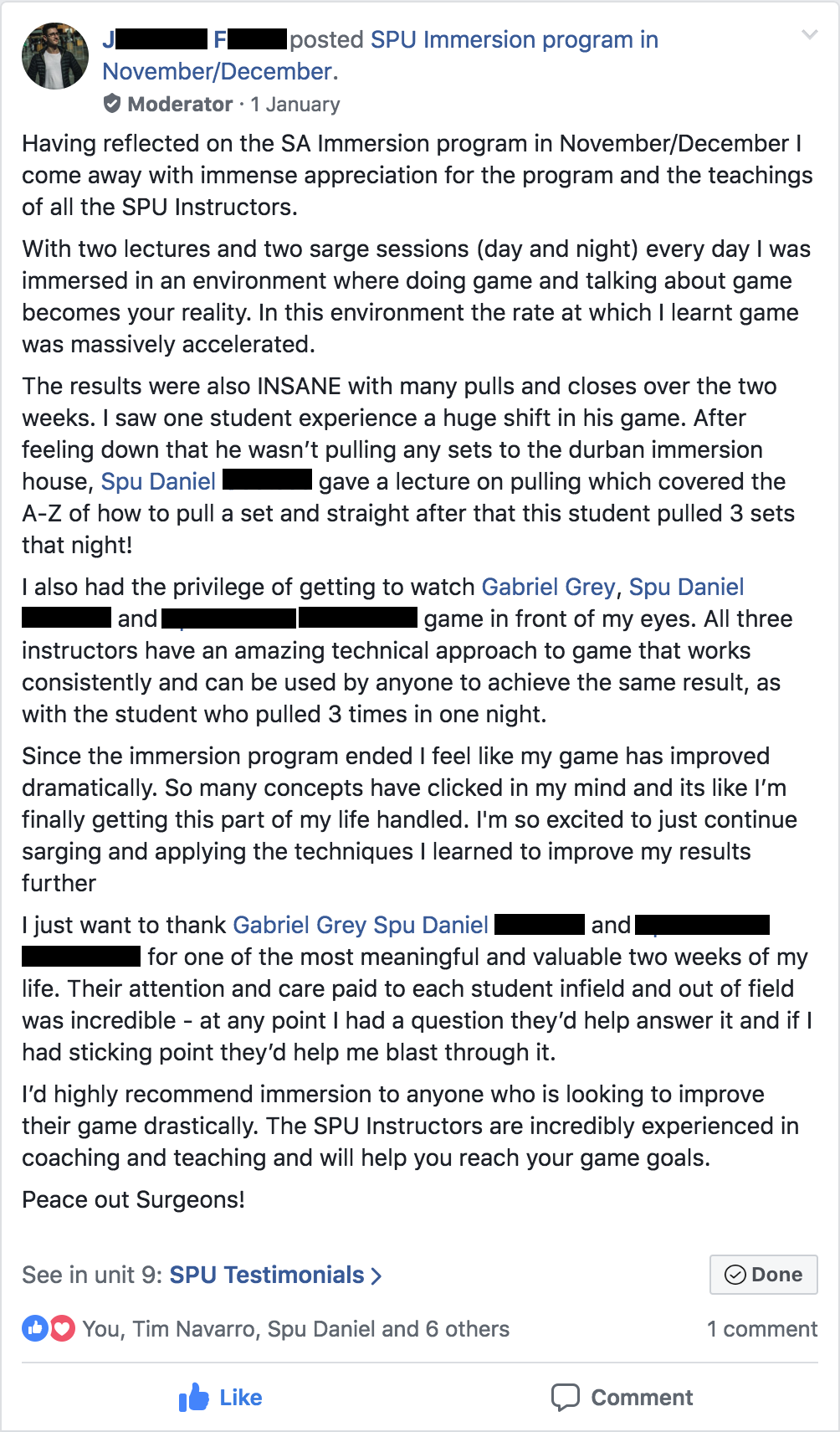 YES! I'm Ready To Get The Women I've Always Wanted
"I had also been on a couple of competitor immersions before this one, however I was still getting very inconsistent results despite my game being 'good' by some accounts... but the material presented in lectures went one level deeper than anything else I'd seen, breaking down the structure of good game and making concepts connect and click on a deeper level of understanding... I saw other students do quick pulls, bathroom pulls, instant make-outs, and perhaps less sexy but more practical, get solid numbers for day 2's. I pulled back to the house with other students from both day game and nighttime, and almost closed a day2 in a restaurant bathroom, which was previously out of my reality... It's the closest thing to having the knowledge of the instructors downloaded into your brain." – A.W.

"In just the last 2 weeks I have learned literally everything I need to move forward with cold approach game, I now know exactly what to work on to take my skill set from intermediate to advanced level going into 2019... I learned exactly how to approach, hook, attract, handle objections then pull the girls that I wanted, and the way from open to close... My results in the last two weeks have excelled way past anything i have achieve before Immersion. Through Gabriel's guidance I was able to get 4 pulls back to the immersion house with hot girls. They showed me how to seed for the pull, make girls chase me instead of always being the one chasing and also make my day 2's solid so that girls don't flake on the date... I can honestly say that two weeks with the SOCIAL HACKER™ team has cut my learning curve by at least 1 year... It will be 10X worth the money because it saves you years of trial and error figuring this stuff out on your own." – J.E. 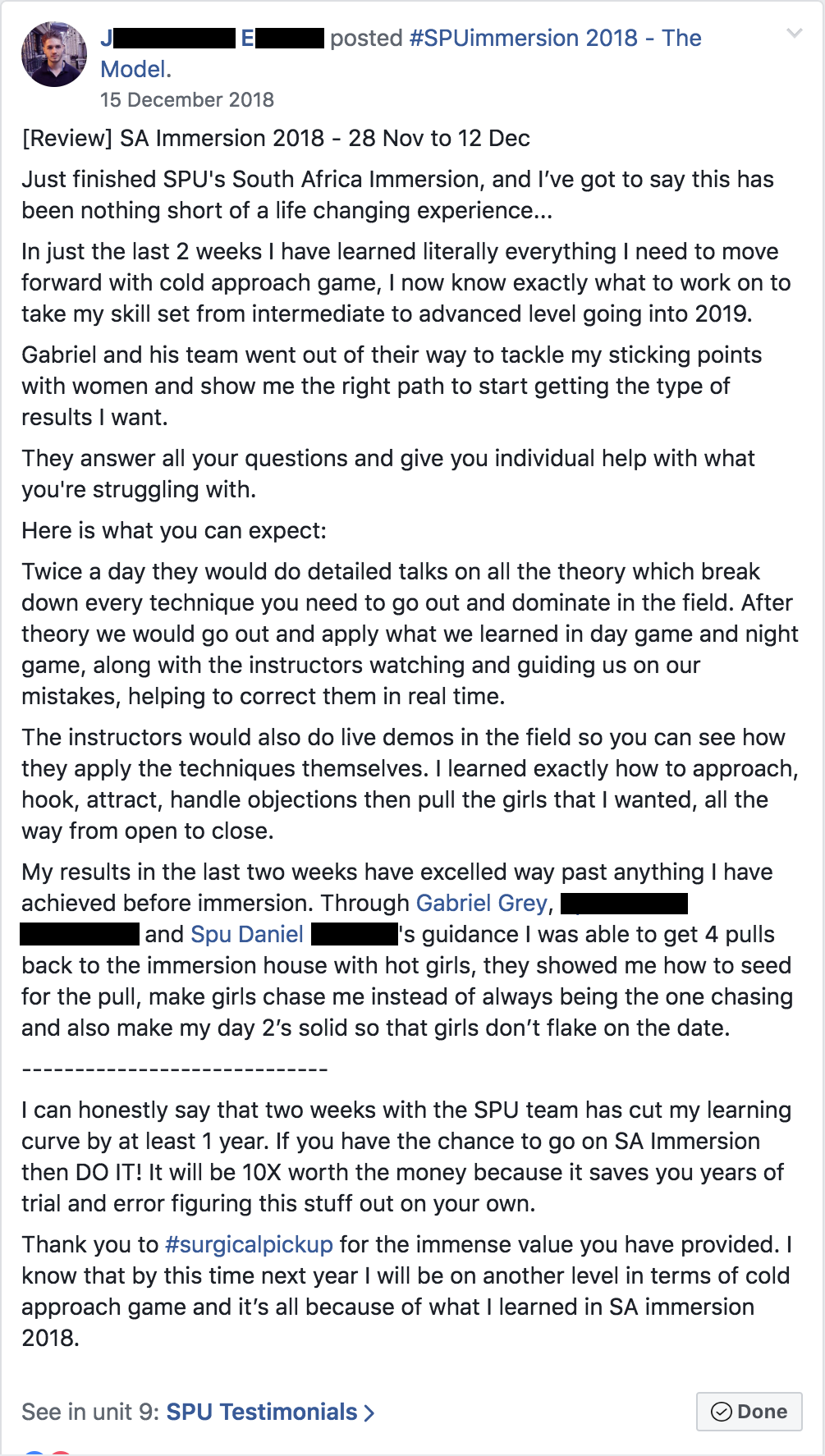 "Firstly, there is no doubt that Gabriel is one of the best pick up coaches out there. From all the stories I've heard from his first wings, he was a hard-case and had to do anything he could to break out of it... his hard work for the past 7 years has clearly paid off since I've seen him close the hottest girls. Girls who you think would not go home with anyone... I would highly recommend anyone who is on the fence about taking an immersion with SOCIAL HACKER™ since they know their shit about technical game and are willing to help a student as much as they can to get better at game." – N.P. 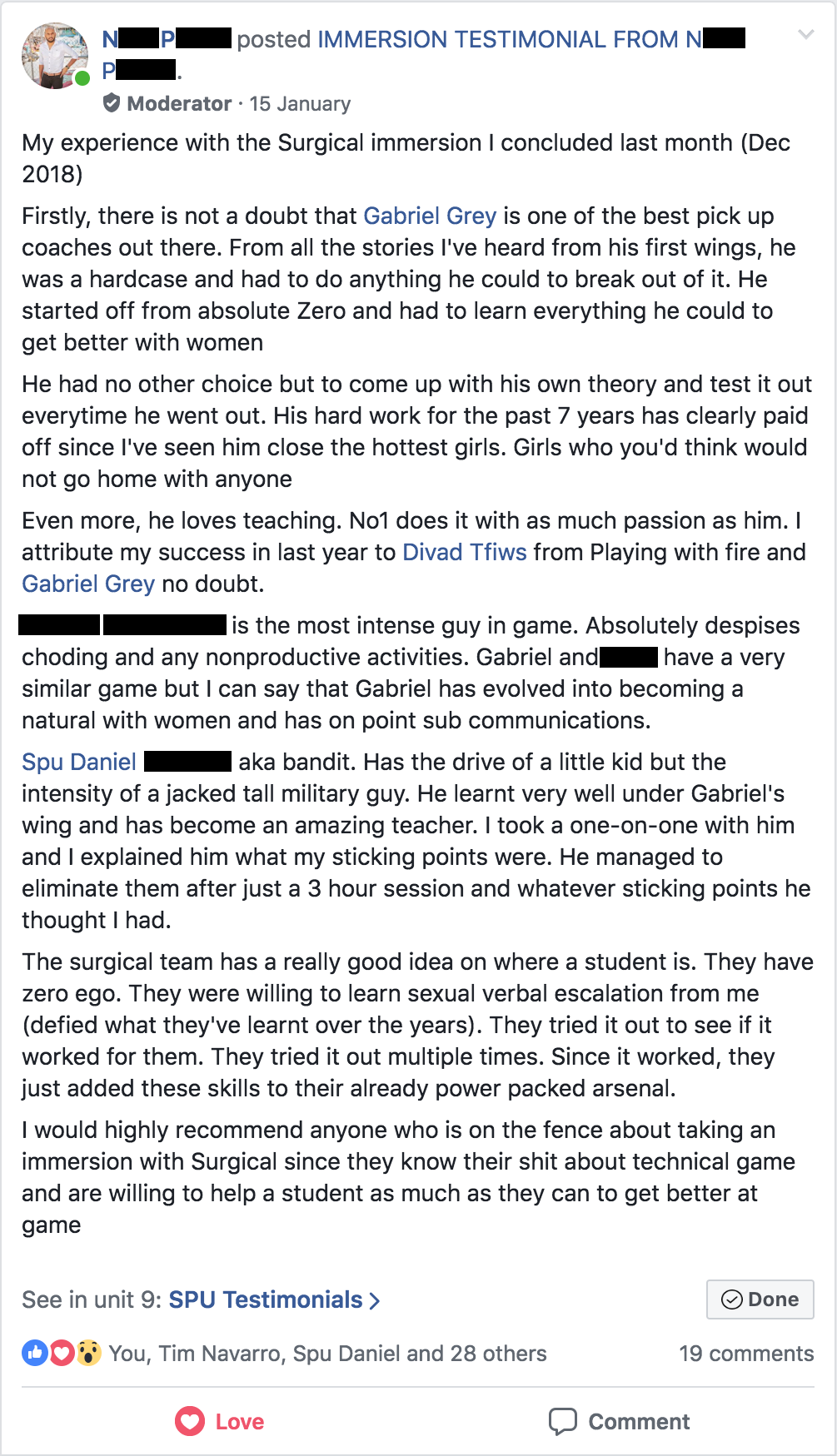 YES! I'm Ready To Get The Women I've Always Wanted
"Being surrounded by like-minded ambitious social hackers that I took massive action with. The constant improvement in my understanding of how to master the skillset of social hacking... from my In-Venue Lay (coached through by Gabriel) to a couple of quick pulls, a few make outs in a night while sarging, and my one on one session with a coach where I learned more in a few hours than I could have wished for. My skillset was improving while I was having f un and getting results... I will most of all miss accelerating my game improvement by probably one entire year in just 2 weeks." – C.S. 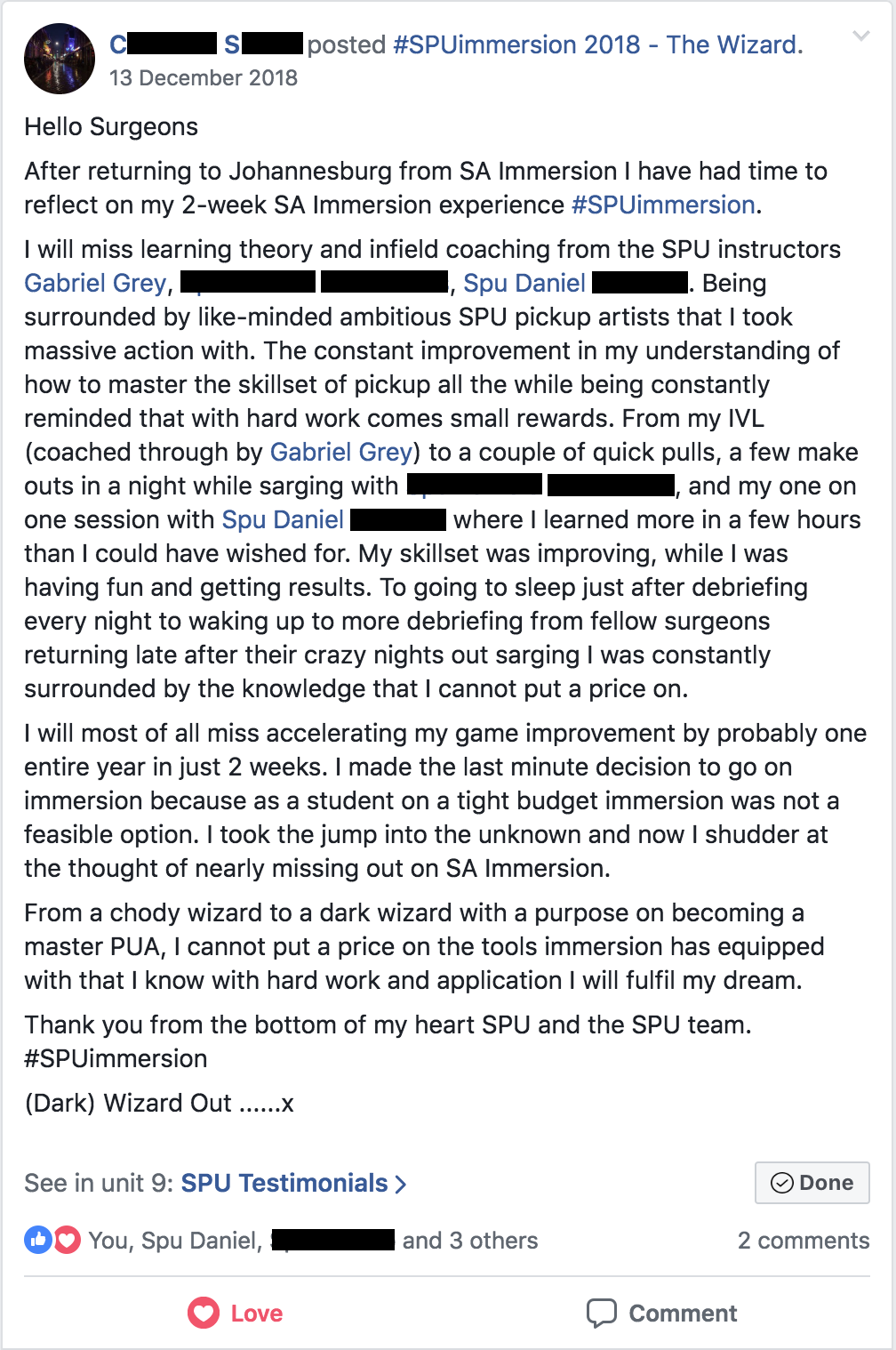 "The experience over delivers on the value you expect. Student pulls every night and a group of wings and instructors to help you blast through your sticking points... Gabriel would go out of his way to give late night lectures to address issues students had in the field. Winging with all the instructors and watching them pull of amazing pick ups then explain to us how to do the same was also one of the highlights of the week." – T.R. 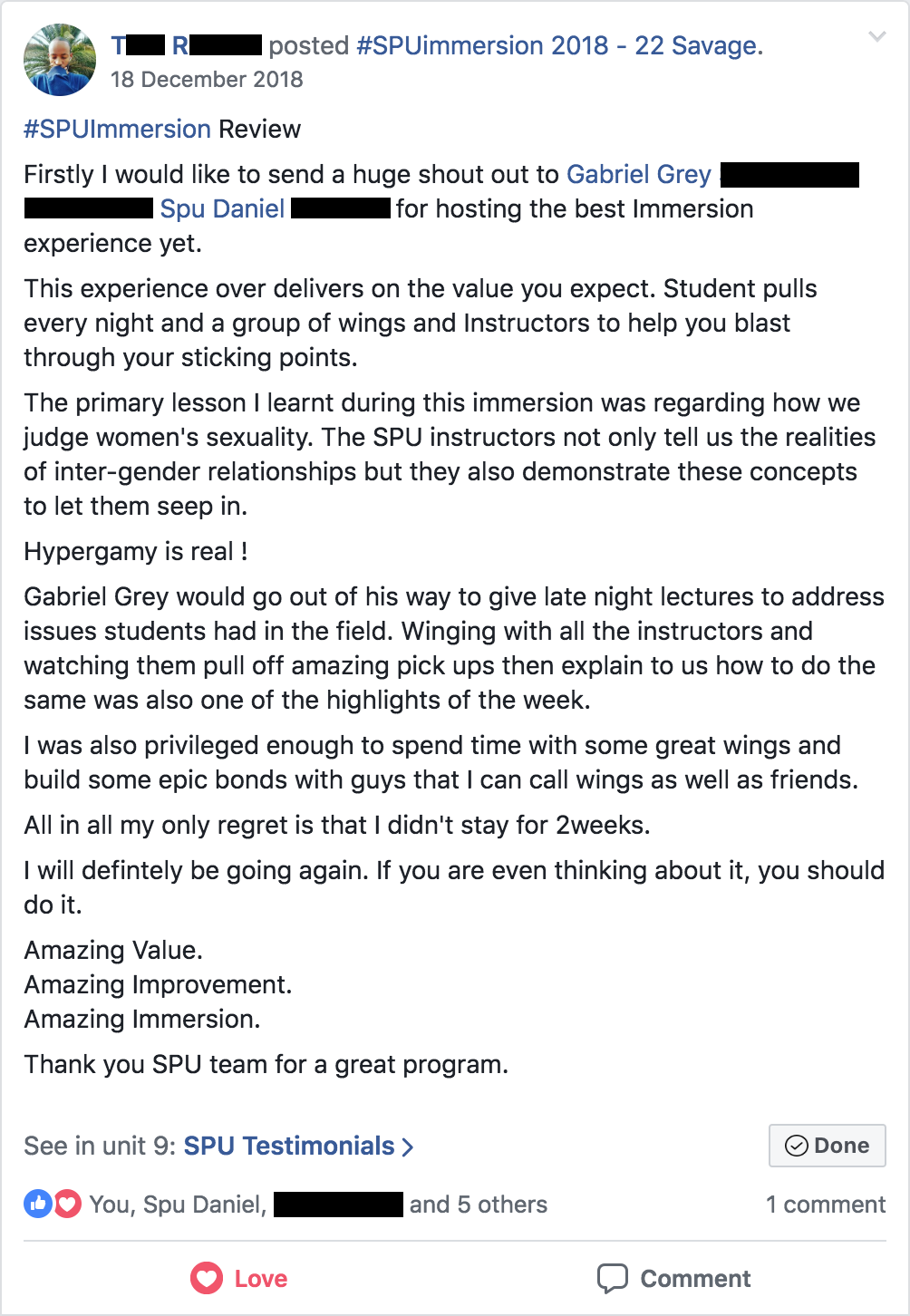 "The instructors have an unwavering energy, have zero ego... They are always approachable... in-field, whether the instructors will demonstrate the skills and techniques they just lectured... Further, instructors will literally be whispering lines in your ear before you realize they were there... you'll see top-level game which will shave massive amounts of time off your learning curve." – G.B. 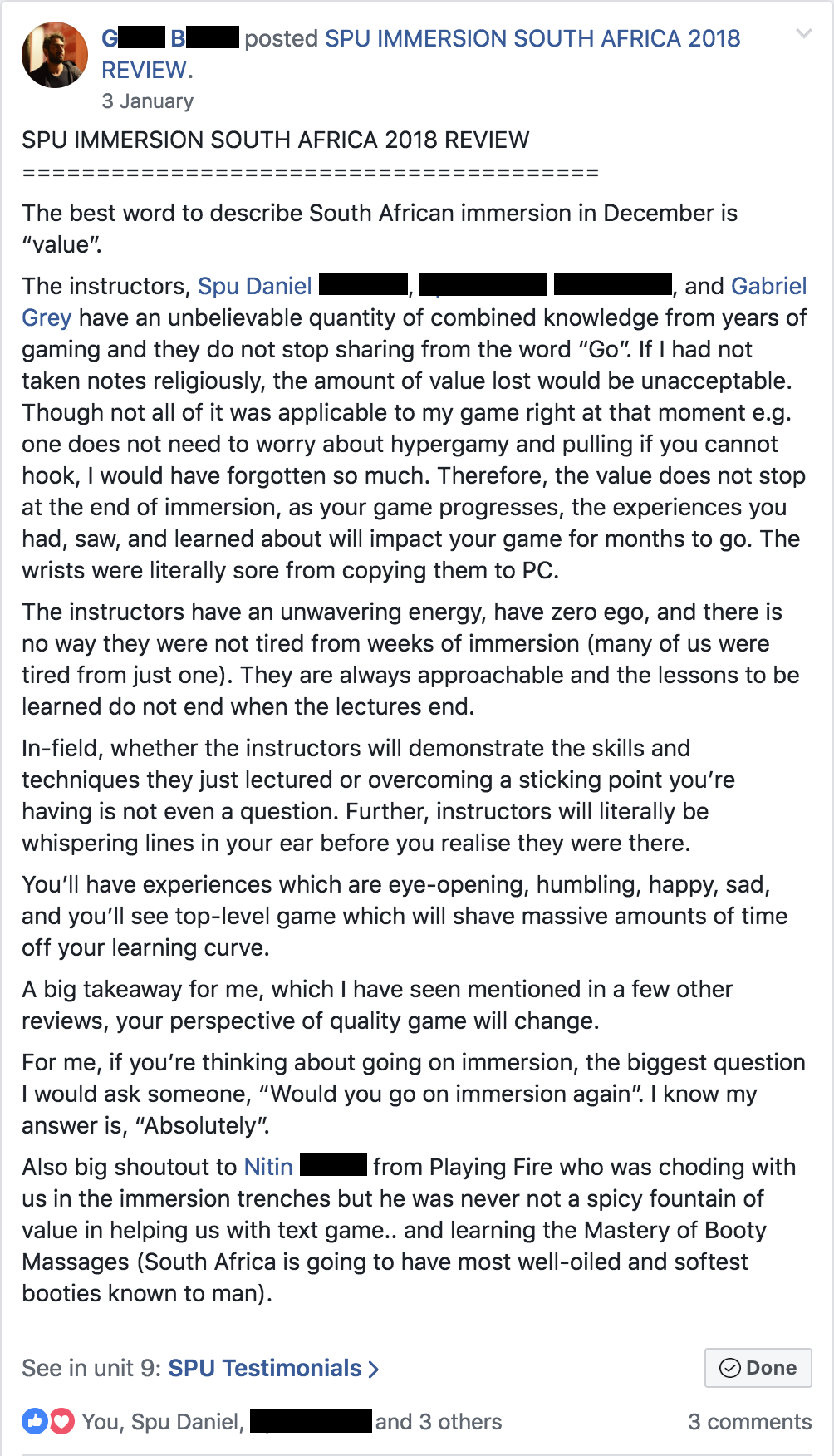 "We were literally living game. 24/7 of talking about game, consuming knowledge about game and actually spending most of our time out in the field gaming." – M.C. 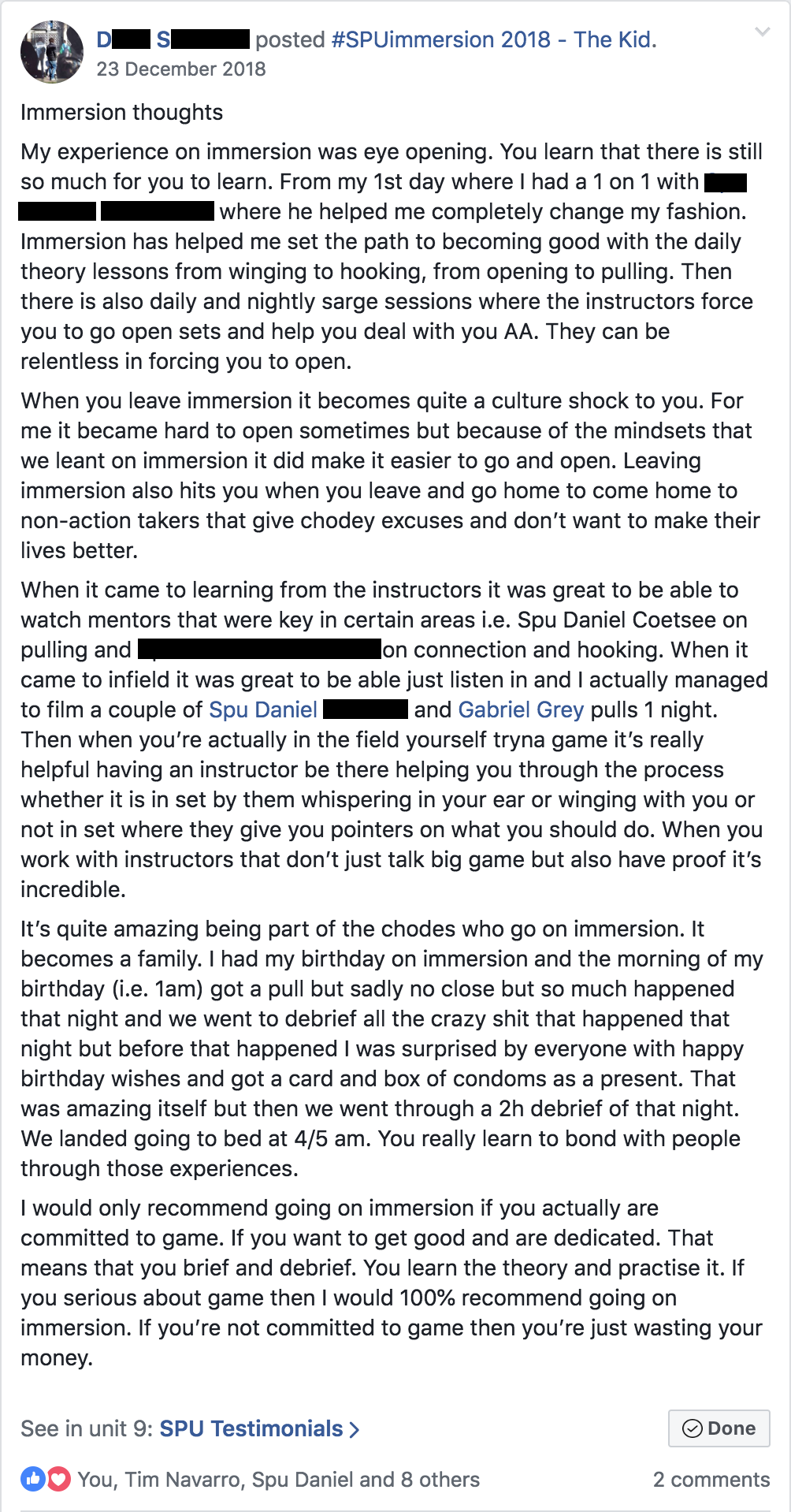 "It's a whole different experience when an instructor would talk in your ear and tell you what to say... having an instructor guide you enables you to see your sticking points faster.... Would definitely recommend an immersion to anyone on this group – best decision I've made in my life... Really glad this cut my learning curve and saved me years." – C.B. 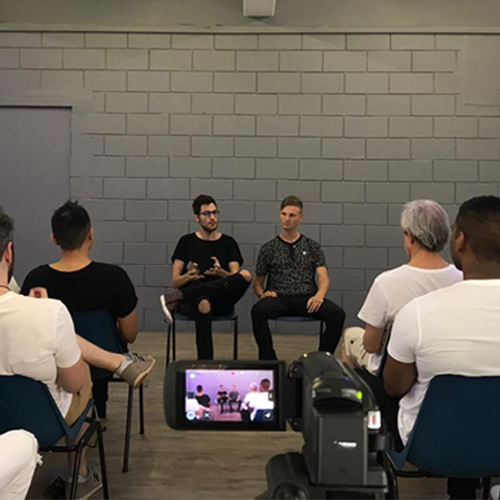 1. THEORY SESSIONS
With a structured curriculum created and taught by your SOCIAL HACKER™ instructors, you'll learn the exact mindsets and skills necessary to get you massive results with women.

Every single part of game imaginable will be broken down into concepts, techniques and a structure which you can easily implement.
Continuous One-on-One interaction and small class size ensures that you get ALL your questions answered.
There will be sessions consisting of: practical and theoretical.
There will be various exercises and drills that are designed to practice, master, and internalize the techniques.
In addition, the instructor will identify, break down, and analyze your sticking point so you can improve your skillset as fast as possible.
Before going in the field, you will brief what your sticking point and the exact thing you are doing to practice getting over it. After returning from a session out, you will debrief, break down, and field report with the instructors what you did well, what you didn't do well, and how you can do better next time. 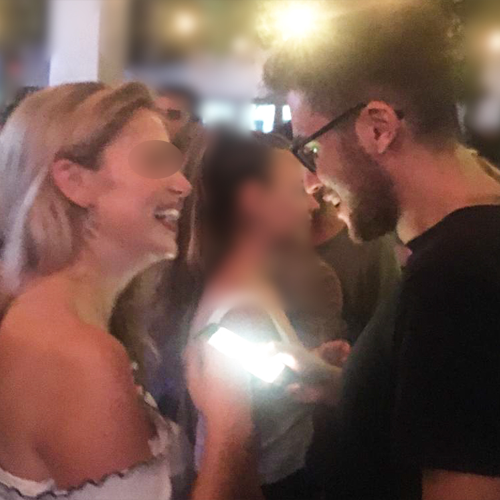 2. NIGHT GAME
Same night lays, organizing a date or a fast pull… all of these require different techniques and different systems which will all be broken down into actionable steps for you to follow. You'll learn the fundamentals of night game including overcoming approach anxiety, opening, hooking, developing attraction, creating emotional and sexual connection, conveying your identity, getting solid numbers, and pulling on purpose. 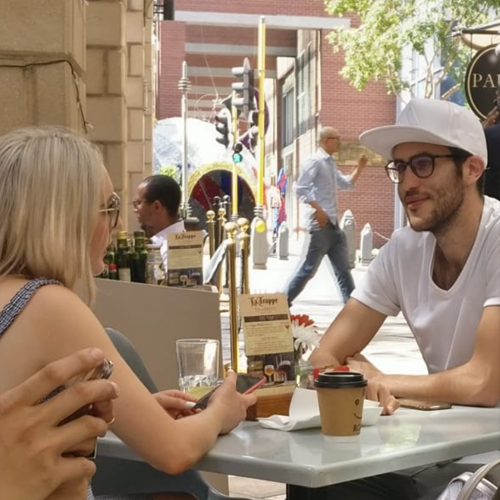 3. DAY GAME
That girl sitting in a coffee shop or walking with her mom... Learn the skills to get her.Day game comes down to a lot more conversational skills and ability to calibrate to the situation. You'll learn the fundamentals and subtleties of Day game from opening, insta-dating, creating investment, getting solid numbers, and pulling. 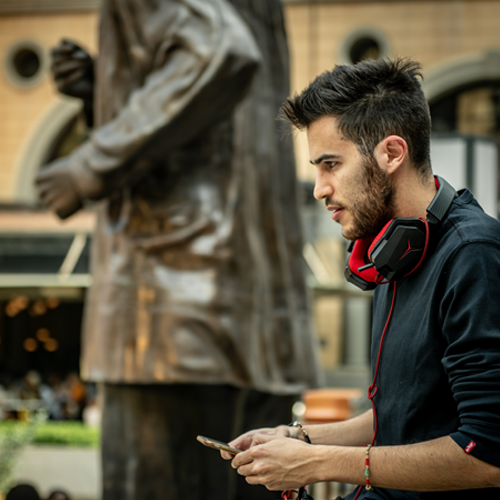 4. INFIELD COACHING SESSIONS
Information is not enough. Application is key.

One of the most important things that you do in Immersion is taking what you learned in the classroom and applying it in the field and practicing, refining, and perfecting your skillset of meeting, attracting, and getting the women that you've always wanted.
You will go out with the SOCIAL HACKER™ Accelerator coaches to game, wing with, and learn from them live, in the field.
You will also have direct access to the Executive Instructors and the other Immersion students via text message in case you need help any time during Immersion. Whether you need advice, a quick tip, or confused about how to move an interaction forward, you can quickly whip out your phone and expect an answer within a matter of seconds from your group of supportive teachers and wingman.
You will also have an opportunity to spend a few hours in the field with one of the Executive Instructors and have their undivided attention so they can watch you in the field and literally take you by the hand and walk you through the correct way to to do game (there is no faster way to learn than this). 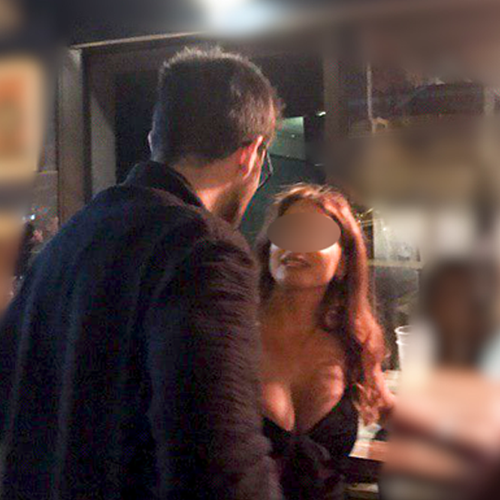 5. INFIELD VIDEO BREAKDOWN
If you are serious about taking your game to the next level. The Immersion team offers an infield footage breakdown of your game. This entails being filmed by a trained cameraman. 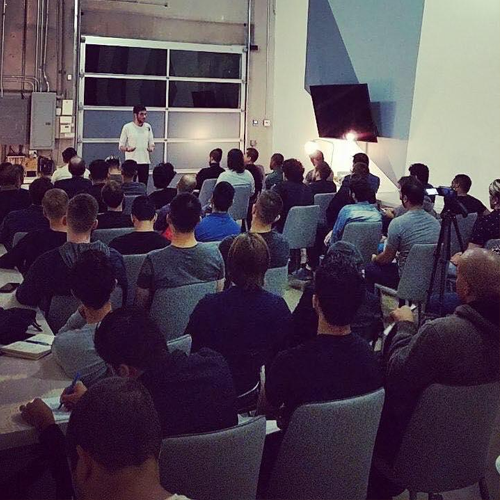 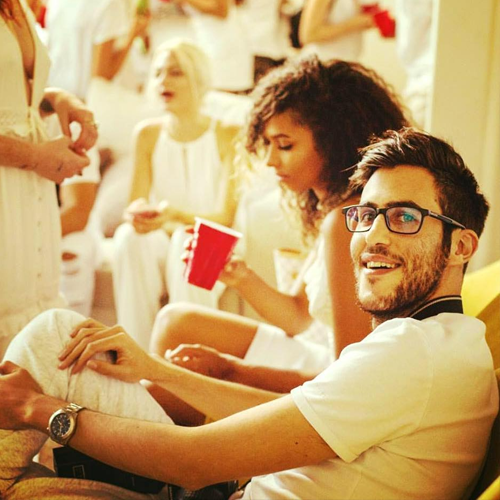 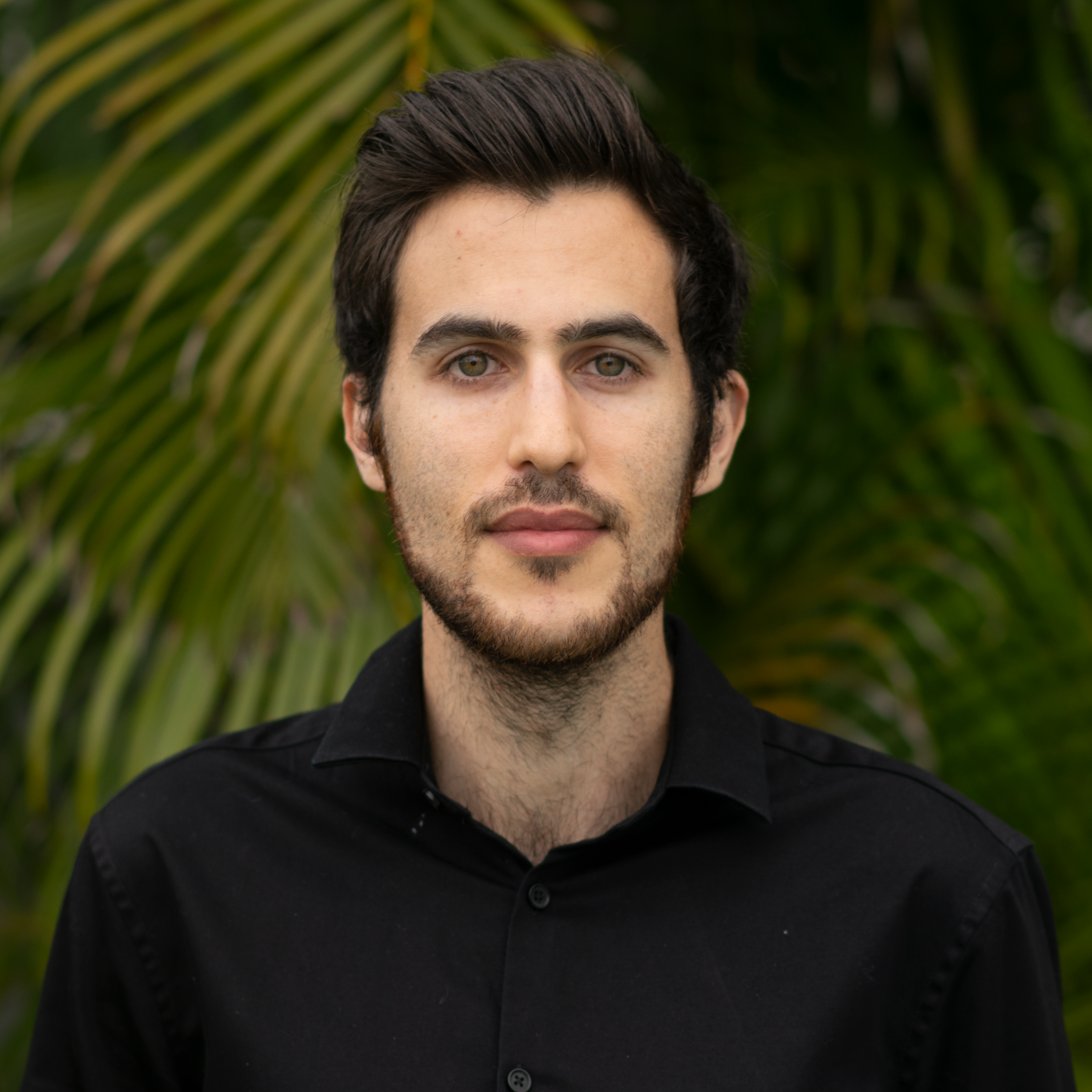 Gabriel Grey is an Executive Instructor at SOCIAL HACKER™.

Gabriel has been practicing and teaching social hacking for almost a decade. Gabriel has traveled the world and taught thousands of men his unique concepts, strategies, and techniques for attracting, dating, and sleeping with women that have transformed the dating lives of his students. He has become well-known for his technical and analytical approach to the game, seeing it as nothing more than a skillset that can be studied, learned, and mastered by anyone. Having internalized the outer game techniques and principles to a CORE level, Gabriel’s style looks deceivingly “natural” despite being heavily technical and completely replicable by his students.
YES! I'm Ready To Get The Women I've Always Wanted This Program Is Limited To 3 People Only... Sign Up Now To See If There Are Any Open Spots Left
YES! I'm Ready To Get The Women I've Always Wanted
© SOCIAL HACKER™ - All Rights Reserved.
928 N Western Ave Los Angeles, CA 90029, United States
Privacy Policy • Terms of Service • Success Disclaimer • Contact